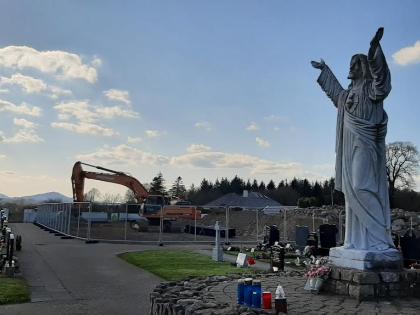 Work has commenced on extending the graveyard capacity at Drumboe Cemetery in Stranorlar.

Huge mounds of earth and stone have appeared at one unused corner of the site as part of the preparatory works while two JCB diggers create a foundation for future use.

The cemetery, which has been in existence since 1978, is very well maintained and treated most respectfully by the local community.

The land was purchased by the late Monsignor Canon Joseph Mulreany PP a year prior to this.

The new entrance and gates, along with the toilet block and store were built by the late John O’Donnell from Curraghamone in 2013.

Local caretaker, Phil Lyons and the parish graveyard committee, have been very active over the years to ensure the quality of this facility is maintained to the highest standards.

Indeed in a recent parish newsletter, local parish priest, Fr. Kieran McAteer, praised the way in which the graves were being maintained adding he was impressed by the large number of people who visited the graveyard during the pandemic.

He revealed this week that with space decreasing, it was decided the time was right to finish off the site.

“We are developing the last part of the site for graves as we were running out of space.

“This has happened in other places such as Crossroads and Glenfin and their extensions have worked very well so we decided to do the same to prepare for the future also.

“All the hard rock in the ground is being removed to  accommodate the graves along with all the preparatory work to leave it ready for use.”

He said it was obvious capacity was running out and work needed to be done.Fr McAteer added due to Covid restrictions he was not able to provide a date for graveyard services.

“We had to do the graveyard Mass via Facebook last year so it might be the same this year.
“It’s the same with First Communion and Confirmation, we just have to wait until the time is right,” he said.

In fact this site where the current work is taking place has some historical interest for the Ballybofey-Stranorlar area.

It is understood the graveyard site was once the main GAA pitch in the Twin Towns. GAA was believed to be introduced to the area in 1916 and two clubs were formed, Ballybofey’s Eire Og’s and a year later Stranorlar Sarsfields.

The two clubs continued their hectic rivalry for the next decade, until experience and pragmatism told, and it was decided to amalgamate the clubs.

This was such a success that a Park Committee was formed and the club’s present grounds were finally secured and also became Donegal’s county grounds.

When noted local Republican, Sean MacCumhaill, passed away in 1949, it was decided to name the new park in his honour, and Erin’s Hope then changed their name to Sean MacCumhaills’ also.

So when the work is completed the cemetery will have additional capacity and it is expected in a few years the site of the current car park will then be developed for additional graves.